The GLM|LIC project Urban Geography of Entrepreneurship and Growth in India led by Paul Novosad (Dartmouth College) and Sam Asher (the World Bank), has recently launched The Socioeconomic High-resolution Rural-Urban Geographic Platform for India (SHRUG), facilitating data sharing between researchers working on India. The repository includes a comprehensive set of data comprising of India’s 500,000 villages, 8000 towns, and 4000 legislative assemblies and spanning over the past 25 years. The datasets are publically available and designed for researcher’s accessibility to high-resolution socioeconomic data as well as giving space for communication, linking and sharing of data.

One interesting study out of this project investigates the impacts of a high-scale national rural road construction program in India on village labour and goods markets, see the policy brief here.

The IZA/DFID Program on Gender, Growth and Labor Markets in Low-Income Countries is sponsoring a conference on “Labor Markets in South Asia” on December 5-6, 2019.This will be followed by a two-day “IZA/DFID Short Course on Program Evaluation” on December 7-8. The course is designed for postgraduate students, faculty members, and early career researchers in government and non-governmental organizations who would like to develop their skills in program evaluation using the latest econometric methods. The course will consist of four half-day sessions and will cover the following topics: Design and analysis of randomized controlled trials; propensity score matching methods; difference-in-difference estimators; regression discontinuity designs. The focus will be on application of these methods to the evaluation of labor market related programs, including skills training programs. Moreover, participants will be given the opportunity to present their own research in a poster session.

Applications should be uploaded via the online application form by September 15, 2019. The Program Committee will aim to communicate its decisions to the authors by October 15, 2019. The schedule of the program is available here.

The Gender, Growth and Labour Markets in Low-Income Countries (G²LM|LIC) programme is sponsored by the UK Department for International Development (DFID) and managed by the Institute of Labor Economics (IZA). It has a budget of more than £10 million over 5 years to fund innovative research proposals on the link between jobs and poverty, gender-specific barriers and the growth implications of improving the allocation of talent in low-income settings.

The programme marks the extension of the successful IZA/DFID cooperation, which started as the Growth and Labour Markets in Low-Income Countries (GLM|LIC) programme in 2011. Directed by David Lam (University of Michigan and IZA), the first project phase funded 43 research projects, selected in a competitive process from over 230 research proposals. The output from the projects, including published articles in highly ranked economic journals as well as policy briefs, is accessible here. The findings substantially expanded global knowledge and provided important insights into successful policy interventions.

A particular focus of the new funding period will be on enhancing equality of opportunity for women in the labour market. The G²LM|LIC programme, directed by Oriana Bandiera (London School of Economics and IZA), will have three Open Calls, the first one in July 2019, to attract excellence in labour economics and encourage innovative proposals. National and international debates and engagements with policy makers will be annually organised, and trainings and peer events will continue to build the capacity of researchers in this field.

The official launch of the programme will be on June 19 at the London School of Economics, with an inaugural workshop including presentations by several leading scholars and a panel discussion.

A small selection of our Projects 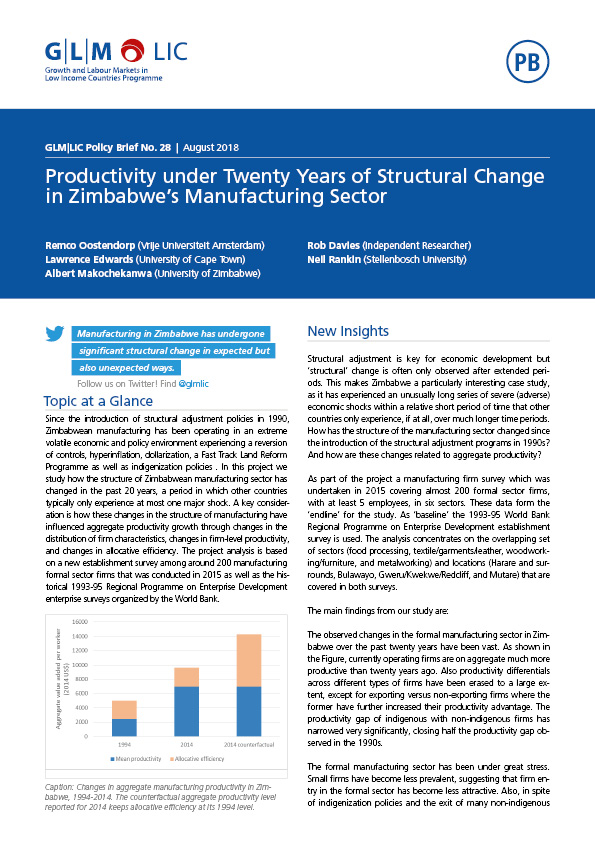 Since the introduction of structural adjustment policies in 1990, Zimbabwean manufacturing has been operating in an extreme volatile economic and policy environment experiencing a reversion of controls, hyperinflation, dollarization, a Fast Track Land Reform Programme as well as indigenization policies . In this project we study how the structure of Zimbabwean manufacturing sector has changed in the past 20 years, a period in which other countries typically only experience at most one major shock. A key consideration is how these changes in the structure of manufacturing have influenced aggregate productivity growth through changes in the distribution of firm characteristics, changes in firm-level productivity, and changes in allocative efficiency. The project analysis is based on a new establishment survey among around 200 manufacturing formal sector firms that was conducted in 2015 as well as the historical 1993-95 Regional Programme on Enterprise Development enterprise surveys organized by the World Bank. 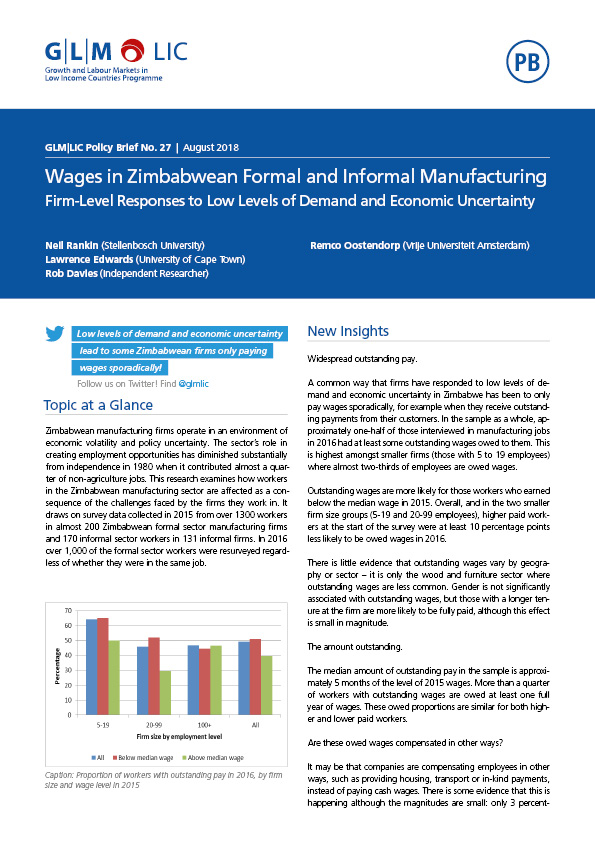 Zimbabwean manufacturing firms operate in an environment of economic volatility and policy uncertainty. The sector’s role in creating employment opportunities has diminished substantially from independence in 1980 when it contributed almost a quarter of non-agriculture jobs. This research examines how workers in the Zimbabwean manufacturing sector are affected as a consequence of the challenges faced by the firms they work in. It draws on survey data collected in 2015 from over 1300 workers in almost 200 Zimbabwean formal sector manufacturing firms and 170 informal sector workers in 131 informal firms. In 2016 over 1,000 of the formal sector workers were resurveyed regardless of whether they were in the same job. 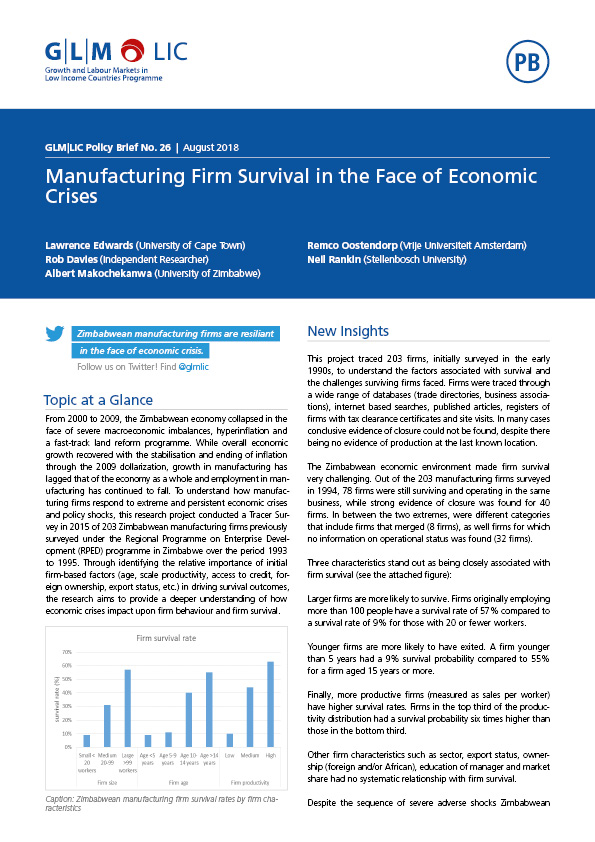 From 2000 to 2009, the Zimbabwean economy collapsed in the face of severe macroeconomic imbalances, hyperinflation and a fast-track land reform programme. While overall economic growth recovered with the stabilisation and ending of inflation through the 2009 dollarization, growth in manufacturing has lagged that of the economy as a whole and employment in manufacturing has continued to fall. To understand how manufacturing firms respond to extreme and persistent economic crises and policy shocks, this research project conducted a Tracer Survey in 2015 of 203 Zimbabwean manufacturing firms previously surveyed under the Regional Programme on Enterprise Development (RPED) programme in Zimbabwe over the period 1993 to 1995. Through identifying the relative importance of initial firm-based factors (age, scale productivity, access to credit, foreign ownership, export status, etc.) in driving survival outcomes, the research aims to provide a deeper understanding of how economic crises impact upon firm behaviour and firm survival. 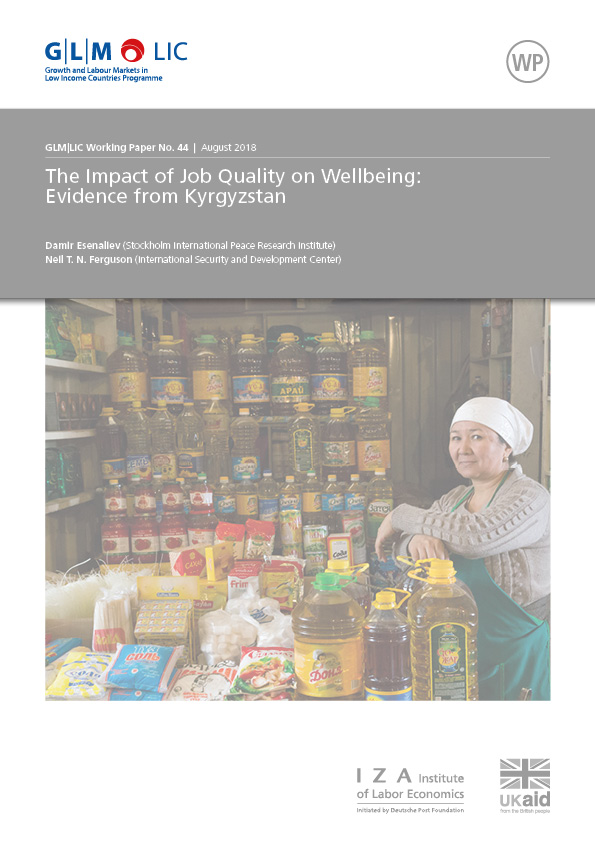 Income and hours worked are insufficient to measure job quality yet these domains dominate literature aimed at understanding its relationship with wellbeing. More so, literature considering job quality in any manner has an overwhelming tendency to look at advanced economies, despite “decent work” being a key policy aim of many agencies and organisations working in emerging countries. This article tests the validity of the concept of job quality as a determinant of welfare in the developing world by generating four six-component indices of job quality using bespoke and unique data collected in Kyrgyzstan. Cross-sectional analysis of the performance of these indices against ones comprising only income and hours worked show no relationship between job quality and wellbeing in the latter case but a strong and positive relationship in the former. Jointly, this shows both the importance of more suitably measuring job quality in all contexts and the importance of policy aims that aim to stimulate better, as well as more, jobs in the developing world. 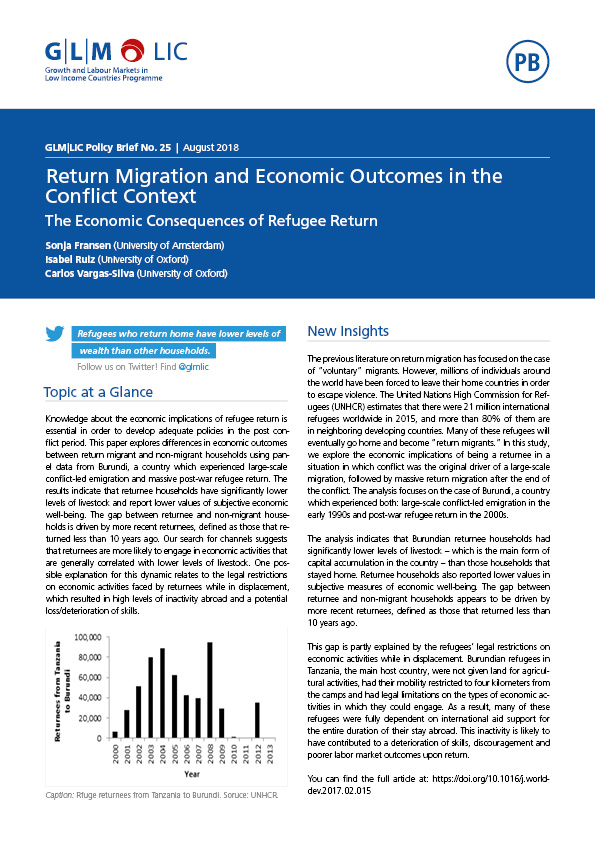 Knowledge about the economic implications of refugee return is essential in order to develop adequate policies in the post conflict period. This paper explores differences in economic outcomes between return migrant and non-migrant households using panel data from Burundi, a country which experienced large-scale conflict-led emigration and massive post-war refugee return. The results indicate that returnee households have significantly lower levels of livestock and report lower values of subjective economic well-being. The gap between returnee and non-migrant households is driven by more recent returnees, defined as those that returned less than 10 years ago. Our search for channels suggests that returnees are more likely to engage in economic activities that are generally correlated with lower levels of livestock. One possible explanation for this dynamic relates to the legal restrictions on economic activities faced by returnees while in displacement, which resulted in high levels of inactivity abroad and a potential loss/deterioration of skills.